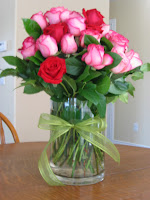 Yesterday was our 5 year wedding anniversary. Ryan was so sweet and surprised me with a special delivery of beautiful roses. They are absolutely gorgeous and smell delightful. He then took me out to a wonderful dinner of Indian cuisine at The Bombay House. Our real celebration will come in couple of weeks when we leave for Hawaii!! Aloha! I can't wait.

I want to tell my husband how much I love him and appreciate him. He is such a good man and works so hard for his family. I'm proud of him and all his accomplishments, and I'm proud to be his wife. He is truly my best friend. I love hanging out with him.

A Tale of Bad Hair

I'm writing this post to give myself a little peace and some sanity (writing relieves stress for me). I went to the hair salon today to get a much needed haircut. I've been wanting highlights in my hair for a long time. Since I've had babies my hair has just been drab. So anyway, I told the girl that I'm going to Hawaii in a few weeks and that I wanted to lighten my hair just a touch for some natural looking highlights. I also told her that I've haven't had my hair highlighted for years due to a bad experience I had in college. The result: down right scary. I look like a skunk mated with some zebra wood (that's the only way I can describe it). The haircut is fabulous. But it's definitely overpowered by the scary animal which is now my hair. I called my hair girl to explain that I can't even leave my house I'm so embarrassed. I won't even get my mail. I'll wait for Ryan to get home for that. She's fixing it Thursday morning. I'm not sure if this can really be fixed without dying my entire head another color but I'll find out I guess. Needless to say I wont' be going anywhere tomorrow. Good day for house cleaning! I haven't decided if I want to attach a photo yet. I'm still grieving the loss of my natural color! It's seems so wonderful to me now, I wish I had it back. Lesson learned.
Posted by Ryan and Susie at 5:15 PM 2 comments:


My kids LOVE bubbles. I took them out to the yard yesterday evening and we had some bubble fun. It was a wonderfully cool evening, and the kids loved the bubbles. I'm kind of sad the summer is coming to an end. But I welcome the change of seasons, I really love autumn. 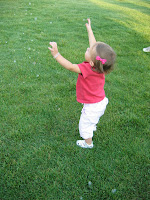 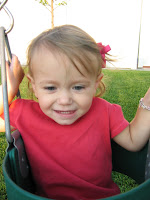 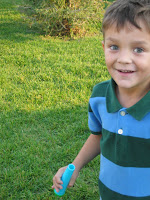 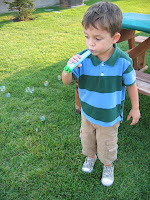 Well, last nights Republican Presidential debate on Fox News convinced me. I went in with an open mind ready to listen to what all the Republican candidates had to say. I guess nothing has changed. Just the same old (I'll dance around the issues and hopefully the American people are stupid enough to believe the jargon that's coming out of my mouth) rhetoric that we usually hear in each presidential election. But alas, I was wrong. Someone did stand up and speak with conviction and honesty, and without fear of rejection. And what he said was exactly what I was hoping, praying for. I love this country, and I want the best for my children, grandchildren etc. Not to my surprise the American people agreed. When Fox News polled America after the debate Ron Paul won by a landslide. There was nobody near him. He had 33% of the vote and the next candidate (Huckabee I believe) had 15% and so on down. If you want to know more about Ron Paul and his platform that preserves our liberties and our constitution please visit http://www.ronpaul2008.com/. I know he may not be as handsome Romney, but Ron Paul knows what he's talking about. And is record in the Congress and other positions he's held speak for themselves. I've said my peace, now I'll let you decide. I encourage everyone to do their homework and think hard when they press that button next November.

Please visit http://youtube.com/watch?v=IWfIhFhelm8 for a great clip.
Posted by Ryan and Susie at 6:08 PM 7 comments:

It's nice to have good girlfriends to hang out with. This weekend my friend Tiffany and I ditched our families and had a fun girls day up in Midway, UT. Midway is this little sleepy town tucked between Park City and Heber. They are famous for their Swiss heritage and host a wonderful event called Swiss Days every year at this time. We stayed at the Homestead and soaked up the wonderful mountain air and time away from kids. We made the most of it. Indulging in great Swiss food, messages, pedicures, and a great chick flick. I love this town. I will definitely be back again.
Posted by Ryan and Susie at 7:29 PM 4 comments: